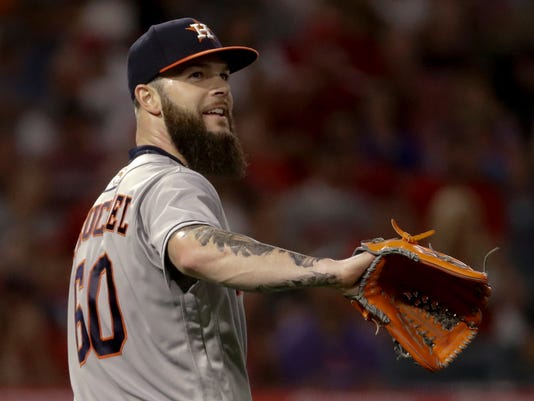 The Cincinnati Reds are continuing in their pursuit of a starting pitcher with multiple years of control, according to a report Monday via Twitter from MLB Network’s Jon Morosi, who adds that a signing of Dallas Keuchel is more likely – albeit far from probable – when compared to a trade with the New York Yankees for Sonny Gray.

#Reds are not seriously engaged in Sonny Gray trade talks at the moment, source says, and as @blogredmachine indicated here. A signing of Dallas Keuchel is more likely, although far from probable. Cincinnati wants to add a starter with multiple years of control; Gray is not that. https://t.co/4RQhXtGmBH

Jon Heyman of fancredsports.com and MLB Network reported in late November that the Reds were said to be “all over” Keuchel, confident that he is fit for Great American Ball Park.

Keuchel was 12-11 with a 3.74 ERA in 34 starts last season. He allowed two earned runs on five hits without a walk and struck out six in seven innings in a no decision against the Reds in 2016 – his only career start against Cincinnati.

Morosi reported Sunday that the Cleveland Indians are asking for a lot in trade talks involving Corey Kluber, with no recent progress and Kluber’s agent suggesting that a deal becomes less likely with each passing day.

LOVE THE REDS?Subscribe today to get access to all of our coverage

Dick Williams talks about adding Yasiel Puig, Matt Kemp, Alex Wood and Kyle Farmer in a trade and what impact they can make with the Reds.
Bobby Nightengale, Cincinnati Enquirer